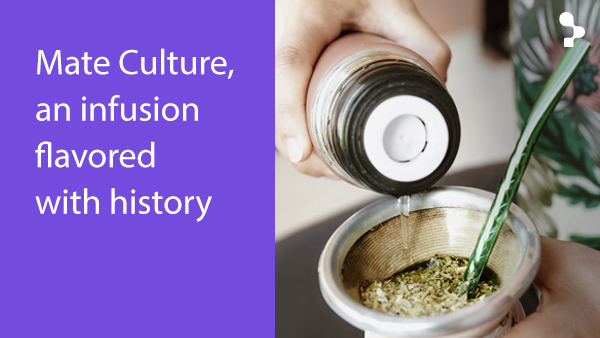 As an ancestral tradition, mate is part of the Cultural Heritage of South America and currently conquers palates from all over the globe. It’s an infusion filled with history and symbolism. It has penetrated the DNA of the people who were born in the southern part of the Americans, especially in Uruguay, where it’s considered the national drink.

Mate is much more than an infusion. It invites us to share moments with our loved ones, represents a company in moments of loneliness, and for people who have left the country, a deep connection to their roots.

It is a very particular infusion! Those who choose it generally don’t do it sporadically, but daily. It is part of their daily lives and identity. If there is something that distinguishes Uruguayans around the world, it is their thermos and mate, which is always carried under their arms.

In Uruguay, if someone goes out for a walk to the beach or a park, almost always brings mate. If he or she is working or studying, no matter where, is doing it next to a mate. If there is a family meeting, of course, Uruguayans go with mate. Other things might be missing, but their faithful companion is there. Mate is part of our talks, encounters and discussions.

On average, yerba mate consumption is 10 kilos per capita per year in Uruguay, which makes it the biggest consumer worldwide. In addition, It is the main importer of yerba over the globe.

Mate represents many things. Connection among people, something that knows no distinctions. It brings people closer, under a common tradition even for a moment.

Undoubtedly, it is an archetype of the region but especially of Uruguay, a socializing element and great strengthening relationships.

The Uruguayan anthropologist Daniel Vidart explained it in his book Uruguayos: “Mate overcomes the separation tendencies of the Creole and equalizes social classes”.

The discussion about its origin is always heated. In an article published in El País, the researcher Alejandro Sequeira outlined: “Mate is a silent witness to our history and one of the few indigenous legacies that not only remains part of the country’s culture but also continues to evolve design and innovation”.

The truth is that its consumption spread throughout South America during the Spanish colonial period. Creoles and Spaniards learned drinking mate after observing this practice in the Kaingang people and the indigenous Guarani, who had lived in the region for a long time before the Spanish Conquistadores arrived. They used the leaves of a native tree called Ilex Paraguariensis to make infusions, as well as currency and a cult object.

It is said that Káingang was the first people to consume yerba mate in history: they threaded the leaves of the tree to their waist and ate it little by little. The Guarani population would have been the first to produce yerba mate as we now know it.

There are many rituals around this drink. “Mate was, in the past, a way of sending messages. A mate served by a woman to a man with some crushed leaves of lemon verbena meant love, while a mate with a leaf from the bombú tree instead – a laxative – meant blunt rejection”, quotes the journalist Angel Ruocco in “Our Always Recipes”, a book written by the Uruguayan chef Hugo Soca.

Customs change over time, but mate consumption never stops. On the contrary, it increases from generation to generation and crosses all kinds of borders.

Not even the pandemic could break the habit of its consumption. Mate culture has been reinvented: mate is drunk now in groups everyone at a distance out in the open, where each one with his or her own mate, and in all kinds of virtual meetings, as a symbolic way of sharing across the screen.

Why is mate such a  special drink?

In addition to being rich in antioxidants and plant nutrients, it is energizing, cheap and can be enjoyed at all times. In fact, perhaps because of all its health benefits, its traditions have extended to many countries beyond South America, across different continents.

It is an intrinsic part of the culture of many populations and, as such, there is a huge diversity of ways to enjoy it.

It is consumed either hot or cold (tereré), sweetened or bitter. With water, milk or juice. And even like tea, which is known as mate cocido. There are also different types of herbs, organic or not, with a variety of blends with other herbs plantsweeds and added flavors.

In Uruguay, most people choose it bitter. The milonga “Mate amargo”, with lyrics by the Uruguayan Tabaré Regules, describes it in different ways throughout his song:

“You are the soul of the kitchen

what a happy simple meeting

and while the flame is lit

you go with tender enchantment,

as if you were a kiss

fluttering in the bombilla”.

Haven’t you ever drunk mate? Or does someone else always prepare it for you?

Here we share a recipe for bitter mate from Uruguayan Cuisine, so you can prepare your first mate in the traditional way that we do it in Uruguay, and then try all its variants until you find your favorite.

1️⃣Heat the water and don’t let it boil. It should be hot, not boiling.

2️⃣Put the yerba mate inside the container (called mate).

3️⃣Fill the gourd up to three quarters and, if you want, you can add one or two tablespoons of sugar, so it doesn’t get too bitter.

4️⃣Stir the yerba inside the mate and leave a free space, without putting the water yet.

5️⃣Place the water gently, the idea that the water isn’t boiling is to prevent the yerba from burning and losing its taste.

6️⃣Let it sit in and then insert the bombilla.

How do you drink mate? We would like you to tell us what mate represents for you!