Blog > Agile Testing > Not Convinced Yet About “Shift-Left Testing”? 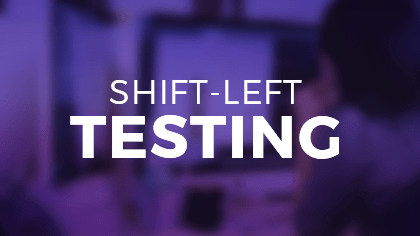 From quality assurance to quality engineering: Why you should use shift-left testing

If you work in the software industry, you’ve most likely heard about “shift-left testing” from conferences, blog posts, industry publications, co-workers, etc. With Agile practices (including TDD, BDD, and CI) and DevOps increasing in popularity, “shift-left” is the answer to how QA fits in, making them a reality in your organization rather than merely aspirations. Making this shift changes the view of testing- instead of traditional QA, it transforms into QE: Quality Engineering.

What is Meant by Shift-Left Testing?

Shift-left testing refers to the integration of testing activities with development, beginning sooner in the development cycle, rather than later as in traditional software development environments like waterfall.

To be successful today, a tester has to not only be great at testing, but also be an engineer of the Agile testing process.

This means working together with development and operations and analyzing quality during every stage of development as shown in the graphic below.

For example, testers have to jump in and take a more proactive role even before development starts by being present during the gathering of requirements.

Some process changes that occur during the shift may include the following:

Why Make the Shift if You Haven’t Yet?

Reduce the Cost of Testing & Development

It is still true what Larry Smith said over 15 years ago when the “shift-left” concept was first introduced, “Bugs are cheap when caught young.”

When testing is done with every build (especially during unit testing), the errors that are found are smaller, easier to detect and locate, and also, less costly to fix. Assuring the quality as we go also means eliminating the tremendous costs and the unnecessary work of having to go back and re-do certain things.

For more information on how much money it saves, read this post on the ROI of test automation.

We often find that the increased levels of automation when shifting left allow for:

Beyond these benefits, being able to start testing sooner invariably results in more quality, as testers are no longer rushing to find all the errors at the end.

Shifting left your QA gives you a competitive edge in two ways: you can speed up time to market and attract top talent.

“Today, the barrier to compete is minimal, and the only way to defend one’s stature is by innovating in short iterations… meaning adopting Agile.” – Alon Girmonsky

As we can all agree that it is important to deliver software more quickly, it also shouldn’t be rushed out the door. Shift-left testing answers the problem of accelerating development without sacrificing quality.

Secondly, shift-left testing is what software developers and test engineers expect today of their organization, officially becoming mainstream with over 66% of IT workers reportedly using Agile or “leaning towards Agile” methods.

According to Zephyr, the number of respondents who use Agile/Scrum, Waterfall, or a hybrid of the two are shown in this diagram from its report: And, it’s not surprising that one of the key findings of the State of Software Testing Report 2015-2016, 55% of testers reported they were already doing or wanted to implement Continuous Testing and Continuous Integration.

Therefore, if you want to be an attractive employer or at least on par with the rest, it is important to adopt the modern practices that both testers and developers want to master in order to stay relevant in today’s labor market.

Maybe you have heard all of those benefits already, but you are STILL not convinced about shift-left testing for this reason: you’ve seen that even Agile teams can face the same bottlenecks as seen in Waterfall.

For example, as Shridhar Mittal, former GM of Application Delivery at CA Technologies, explains, “Due to the complexity of environments and composite applications, Agile teams are often stuck waiting in a queue once all of the pieces come together in the performance and user acceptance testing phases.”

The solution he provides that we agree with is utilizing service virtualization. Service virtualization emulates the behavior of essential components that will be present in production, enabling integration tests to take place much earlier in development. This is how you can eliminate that key bottleneck, while also benefitting from eliminating errors earlier on.

Along with service virtualization, you have several tools to set up your automated systems and CI such as Jenkins, CruiseControl, Bamboo, and TeamCity, which all have web management interfaces. Or, you could go with a cloud solution like Amazon Pipeline Code, TravisCI, CircleCI, Codeship, and Microsoft’s Visual Studio Team Services.

Just having these tools in place does not ensure a successful shift and does not imply quality engineering. There are several preconditions and a level of testing maturity that must be reached in order to achieve Continuous / Agile / Shift-left testing. For example, a precondition for test automation would be having the appropriate test environments set up. Without this and several other preconditions, your shifting of QA to the left will be problematic, at the least.

Is your team ready to shift-left? Take our software testing maturity assessment to find out!

With Agile being the norm, shift-left testing is a key enabler for increasing quality and efficiency, reducing costs and risks, and staying competitive. In shift-left testing, everyone becomes a quality engineer and the responsibility for producing high-quality software is equally shared among the team.

This ultimately results in a better product, shipped even faster.

Who wouldn’t want that?