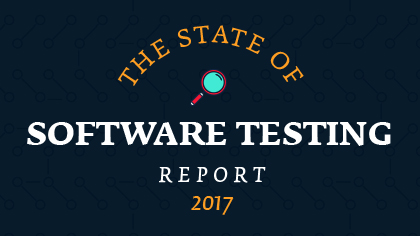 Over 1600 testers have spoken… here’s what they reveal about the state of software testing in 2017.

The latest and greatest international report on the software testing profession has been released, the State of Testing Report 2017 by PractiTest and Tea Time with Testers! It shares results from this year’s testing survey with more than 1,600 participants from over 60 countries.

In general, the report shows a continuation of the trends that we noticed last year.

Here is what Joel Montvelisky had to say about this year’s report:

“For me the most interesting thing is to see that testing changes as an evolution more than a revolution. We see a slow but bigger adoption of DevOps, we also see testers getting involved more and more in CI and CD, and overall playing a bigger part in the general trends that are affecting our development ecosystem as a whole.”

Like we did for a similar report last year, we figured it would be helpful to sum up the info from the report in an infographic for today’s post. If you get a chance, you can read the whole report here.

Let’s take a deeper look at some of the most salient findings from the report:

How Today’s Testers Got Their Start In Testing

What is funny is that more testers got involved in testing by accident (32%) than those who knew they wanted to be a tester beforehand and thus studied to become one (24%). Here it is interesting to note that formal testing training is on the rise, as 43% of testers engaged in it over the past year, up from 23% in 2016. Certifications were also a major form of learning for testers.

The other ways that testers got started in testing were:

According to the report, the top three most critical skills for testers today are communication, functional automation and scripting, and web technologies. Some important virtues were also noted such as humor and patience! We agree, a good tester is one with a sense of humor and patience.

Some other tasks that testers most often reported helping with and thus should try to be good at are helping to create the documentation correctly, managing environments and being involved with the deployment and integration operations.

The Size of Test Teams is Shrinking

Some interesting shifts were reported in the structure and size of test teams. Notably, less QA teams reported to a VP or Director of QA and more reported to Project Managers. Also, in line with the previous year, test teams are getting smaller, which makes sense as development teams are increasingly adopting Agile. 26% of teams were composed of 6-15 testers while 43% had only 1-5 testers.

It is clear now that the adoption of Agile is practically universal, with close to 87% of respondents saying they work with Agile or Agile-like methodologies. This is a 5% increase from 2016, which is pretty significant given that the number was already quite high.

Right on the heels of Agile, CI/CD is almost a standard in the world today with 75% of respondents claiming they use it either all the time or in some projects. The authors of the report boldly make their conclusions about CI/CD by saying, “To the people who do not know what CI/CD is, you better hurry up and learn what it is.”

Lastly, a DevOps development model was reportedly followed by 26% of testers, up from 23% in 2016.

Testers are testing not just applications, but also new tools for testing. 56% reported that they had used a new tool in the past year which is good news for software testing tool vendors! It’s also good news for testers because it means they are innovating. At Abstracta, we believe it’s always a good thing to evaluate new tools, in order to explore better and easier ways of testing.

Testers face an unlimited list of responsibilities and tasks in always a finite period of time. So, it is no wonder that the number one challenge that testers reported they face is coping with time frames. Other problems that persist for testers are communicating the value of testing to rest of the organization, getting good tools and training, and time spent on side tasks not related to testing.

A Prediction for the Future

Testers were asked to look into the crystal ball of their mind’s eye and predict what subjects/ technologies will be important 3 to 5 years from now. Here are just a few:

And that wraps up the most important things you should know from the State of Software Testing Report 2017! Are you surprised by anything? We can’t wait to watch and see what happens as the year goes on, observing which trends come and go. One thing that is for sure, testers will remain in demand, and at Abstracta, we are hiring! If you are an experienced software tester, send us your resume to [email protected]!