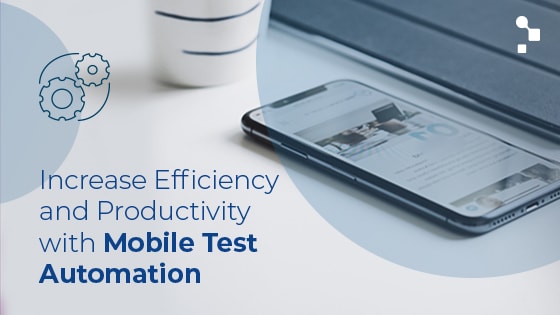 How can your mobile app appear first in its category on the app stores, for millions of potential users to see? 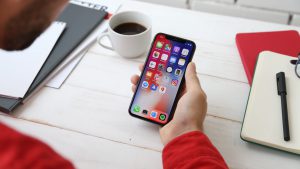 In this guest post, our friends at Bitbar explain how mobile app testing is an essential part of marketing an app and the plethora of benefits that automated testing can bring to your project.

Efficiency and productivity is the name of the game in test automation nowadays, with a combination of speed and robustness. ‘Speed’ means time-to-market and how early developers can publish updates to their applications. In the case of Android apps, it’s also a known fact that the first ‘robust’ application of its category to arrive on the Google Play store tends to stay at the top of download rankings, which then leads the app to being exposed to hundreds of millions of mobile consumers. Later entrants, competitors to this first application in the marketplace, are always challengers. So, what should they do to get traction for their application?

Software bugs and failures in any app can cause reputation loss and also push the app down in the search results. It’s essential to remember that only those 5-star ratings will keep an app in front of hundreds of millions of potential downloaders.

Well, that is just one part of the story. Many mobile app developers face economic pressure as they can’t afford (manual testing) resources, and there is an imminent need to reduce overall costs. Let’s explore the reasons why test automation saves you money, time and resources – when implemented and adopted efficiently.

For starters, test automation provides various benefits to developers: coverage to detect bugs and errors – early and later during the development – and significantly reduces the cost of a failure, saves time through its repeatability and earlier verification, and leverages the improved resource productivity. Implementing test automation for your mobile app development process is the best way to gain these benefits and make use of your resources and time effectively.

Since apps under development regularly change and become more complex, their feature set keeps growing and thus, the need for test cases should increase at the same pace. However, for so many apps, this is not the case. With just one new critical feature added to your application, all features should be tested again to ensure a bulletproof behavior and user experience. Moreover, this is the most important reason why manual testing can’t keep up. Automation – when built properly and adopted professionally – will solve this for developers.

However, if the automated tests are not implemented to be maintainable when the application changes, it will be trickier for testers. If you need to rewrite those tests or significant modifications are required, testers will keep starting over instead of building on prior efforts. Therefore, it’s essential to adopt an approach that supports maintainability over the life of the application.

Manual Testing vs. Test Automation – What to Consider?

Automating tests for your mobile application is the best way to increase the effectiveness, efficiency, and coverage of your software testing. Let’s look at some things to consider about when test automation provides you significant value:

1. Costs, Assets, and Time to Market

Test automation for mobile has been considered a critical factor for big mobile app companies, but for some reason, it is often thought to be too expensive or difficult to adapt to smaller companies. Probably due to historical reasons, the cost factor is the first consideration when deciding whether a company wants to use automation or stick with manual testing in its development projects. Regardless of if you select manual and automated testing, you’ll need the following assets and resources – and those will cost you money: Time, People, Infrastructure, Tools, and Training.

Depending on the size of the project and application, it’s quite evident that test automation will provide you a return on investment (ROI) – how big that ROI is entirely depends on how it’s adopted and executed in your organization. For example, once you create those test cases, automation can be run over and over again at no additional cost, and faster than if they were executed manually. Automated software testing can reduce the time to run repetitive tests from weeks to hours, and this is a significant time-saving that translates directly into cost savings.

In an average mobile app development project, the costs for manual testing continue to rise when you create a new build, but the same doesn’t apply that significantly to automated tests. Acquisition costs are typically higher in test automation, but those will quickly pay off and increase the ROI.

2. App Development and the Automated Test Cycle – Always Together

Increasing efficiency and productivity with test automation in your app project starts with a new mindset. Software tests have to be repeated often during all development cycles to ensure the best possible quality of the application. Every time source code is modified, software tests should be repeated. Each software release should be tested on all supported variants of operating systems and different hardware configurations. Manually repeating these tests is costly and time-consuming. For example, running high-coverage tests on all different variants of Android and actual devices would take much time when done manually.

Test automation is an easy task once adopted from the beginning, and it will save you time and money while the development goes on. Determining the number of relevant test cases and releases will also indicate how well test automation will work for your project. 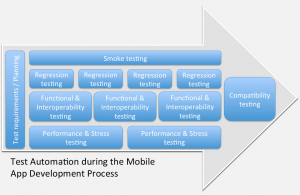 In most projects, it makes sense to start with manual testing, especially early on in the development process; this will offer developers an excellent opportunity to refine their test strategy, set test requirements and plan how testing will be done during development. Later in the process, when testing processes are standardized, all different types of automated testing will start delivering benefits as well as mobile performance testing.

Humans are not infallible. We’re not – and we’ll never be as accurate and precise as machines (or generated test cases). Even the most conscientious tester will make basic mistakes during manual testing. Automated tests perform the same steps precisely in every execution and never forget any details.

To get the most out of your testing efforts, the selection of the most robust and often cross-platform automated testing method is truly the best way to ensure maximal test coverage, on time and with great results. It’s a well-known fact that automated testing methods can be used for both validating requirements and reducing the costs of testing through automated test case generation. However, the full automatization of large software entities also has a price that many companies haven’t been ready to pay. Historically, one of the reasons is the recurring concern of the lack of adequate integration with well-established development life cycles.

Keep in mind that testing frameworks such as Robotium, UI Automator, Selenium, Appium, etc., are just methods. Some of those are better suited for native app testing, some better for web and hybrid app testing, but to get the most out of these frameworks and methods, you need professional testing tools to fully utilize benefits that these frameworks have to offer.

Also, one essential tool for mobile developers to use to automate their testing effort is Jenkins, which is currently the leading open-source continuous integration (CI) server monitoring executions of repeated jobs, such as building a software project or jobs run by cron. Currently, Jenkins focuses on two tasks:

Open standards means no vendor lock-in. Automated testing can increase the depth and scope of tests and help significantly to improve software quality. Lengthy and thorough tests – often avoided during manual testing can be run automatically. Ideally, test cases should have full access inside an application and test all aspects of it: memory contents, data tables, file contents, and internal program states to determine if the product is behaving as expected. Automated tests can efficiently execute thousands of different complex test cases during every test run providing coverage that is merely impossible with manual testing. Humans freed from repetitive manual tests have more time to create new automated test cases and build more compelling features (and test cases).

Extend test coverage with many different types of test cases. For example, generating and recording your tests can be done without any knowledge of C, C++, Java or any other programming language. Also, choosing the right device set (not emulators) for testing is a crucial decision and depends on the global market that you are reaching with your application. For example, the most popular Android devices by volume are typically good picks, but testers should also consider platforms/OS versions, display resolution, the memory size of those devices, and even hardware differences (chipset, set of sensors…).

One important thing to consider here is that developers and testers should stick with open standards and only test cases that rely on open, transparent APIs; this will help in reusing test cases later on.

5. Learning and Improving Effectiveness, and Getting There Sooner

Testing efficiency is the average number of tests you can run per hour of a tester’s time. Higher testing efficiency drives down product development time and costs, improving your bottom line.

Testing effectiveness is the rate at which your testing technology reveals bugs before your systems are released. Increased efficiency reduces costs through a better product, improving your bottom line now and your top line later by building customer satisfaction and loyalty.

If your company sells software products that must be tested before release, reducing your time to market can yield enormous benefits. Replacing manual testing with automated testing can cut weeks or months from elapsed testing time, improving your top line.

Besides, from our experience, test automation also improves team spirit, since when aspects of testing are automated, testers and developers have more time to dedicate to other areas of the application.

Summary – How to Get in Front of Millions of Users

The mobile application ecosystem is very dynamic but also suffers from both software and hardware fragmentation. OEMs are launching new devices and new customizations that can break your application, and new OS versions are also delivered now and then, so it’s important to remember that your app needs to be updated when something happens in these ecosystems. To meet the market and device compatibility, it’s recommended to revisit and test your application against these devices. For this, automated testing has you covered – you already have those test cases/scripts/code that are reusable, without zero investment costs or manual intervention.

Many software testing tasks can be laborious and time-consuming to do manually. Also, a manual approach is not always effective in finding certain classes of defects. Test automation offers the possibility to perform these types of testing effectively. Once tests have been automated, they can be run quickly and repeatedly. Many times, this can be a cost-effective method for regression testing of software products that have a long maintenance life.

Because of this, savvy managers have found that automated software testing is an essential component of successful development projects.

Some food for thought:

When to Automate a Test?
How to Quickly Set Up Test Automation in CI/CD