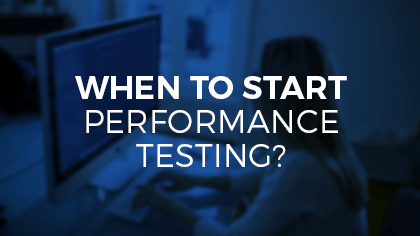 When is the Best Time to Start Performance Testing?

Should we test performance throughout development or at the end? – Agile vs. Waterfall approaches

When taking into account the performance of existing systems or ones built from scratch, teams have to determine at what point in the development process they are going to benefit most from running performance tests. I’ve spoken about this topic at a couple of conferences, including the CMG imPACt Conference in La Jolla alongside Sofía Palamarchuk, and I thought, “Why not summarize the talk in a post?” So, the purpose of this post is to answer the question:

Should we start performance testing at the beginning, alongside development (taking the agile approach) or at the end (the waterfall approach)?

First, a quick overview of what performance testing implies:

A computer’s performance is characterized by the amount of useful work accomplished by a computer system compared to the time spent and resources used. Remember, performance doesn’t only refer to speed. For example, a system that is very fast that uses 100% of the CPU is not performant. Therefore, it is important that we check both the user experience (the perceived response time, or the velocity) and how stressed the servers are. Furthermore, if we only pay attention to response times, we could only be seeing symptoms when what we really want to find are the underlying root causes in order to identify those bottlenecks and then the ways in which we could improve.

Now, back to the question at hand: Should we take the waterfall or agile performance testing approach?

To clarify what we mean by the two, the agile approach is when we start performance testing at the beginning of the development process and continue with it along with the whole evolution of the application.

The waterfall approach is when we leave all the performance testing activities for the end of development, as acceptance testing, checking that the system performs as needed.

Let’s take a look at what they entail and then the advantages and disadvantages of each.

In this approach, we usually wait until the end of development to start testing. The performance tests take the form of acceptance testing and if the criteria are met, the system is ready to go into production. This involves simulating the expected load scenario.

When choosing between these two approaches, it is first important to take stock of the people, technology, and processes with which you have to work. It is important to have testers with both the proper soft and hard skills for performance testing. You also have to take into consideration which tools to use when load testing (ie, JMeter, BlazeMeter, Gatling, etc.) and monitoring both on the server side (ie, New Relic, NMON, perfmon, etc.) as well as the client side (with tools like Apptim, Page Speed, and Yslow,). Processes include test design, test automation, test execution, and measurement. When coming up with an execution plan, we recommend testing against a baseline and then use an iterative, incremental approach (I’ll write a follow-up post on what that means soon!).

So, which approach is right for you? Well, it depends what your desired outcome is.

When to Go with the Waterfall Approach

You may want to run a load simulation at the end when:

When to Go with the Agile Approach

You may need to take this approach that entails performance engineering throughout development when:

Can we definitively claim that one approach is better than the other in every instance?

We need both approaches in different stages of our development cycle. We should start early by doing performance engineering and we also need to simulate load for acceptance testing.

And, in reality, the two approaches are not all that different. Both require the same use of people, technology, and processes, but they slightly vary depending on how far along in development you may be.

Choosing Between the Two in Real Life

At Abstracta, many of our clients come to us asking to take the waterfall approach, with the intention of running load simulations and acceptance tests before go-live of a new version of their system or after making a change to their architecture, etc. One instance in which we’ve done this was for a financial institution that had recently merged with another, and it needed to assure that after having doubled the number of accounts in its internet banking system, the performance wouldn’t suffer.

If you are looking for more support, check out our other performance articles or contact one of our consultants today to start performance testing.

What are your experiences with the two approaches?


3 Metrics Every Performance Tester Should Know